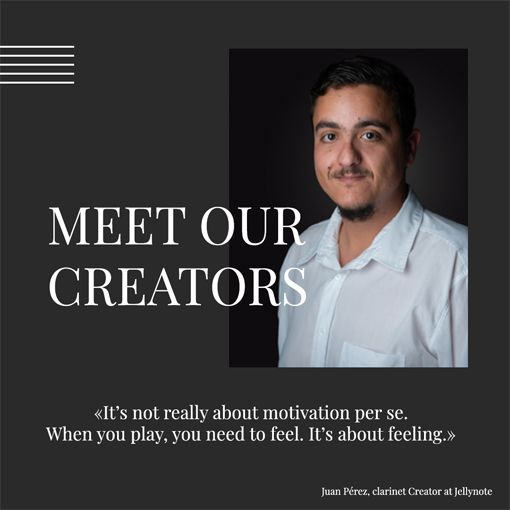 In the Meet Our Musicians series, Jellynote introduces you to the Creators behind the sheet music on our platform. Discover their musical style and get to know them!

Between rehearsals for an upcoming concert with his clarinet quartet and contributing his creations to Jellynote, I am surprised but nonetheless pleased that Juan Antonio Pérez has managed to find the time for an interview.

The first thing that strikes me as he talks about himself is the brevity of each response, as if, despite a series of impressive musical achievements, he is reluctant to be too self-congratulator. Trying to squeeze the slightest sense of pride out of him is a challenging task, but one I am more than happy to take up as we sit down together over Zoom to discuss his life and relationship with music.

Juan A. Pérex first embarked on his musical journey at five years old, when he started to read music and play the clarinet. He does not go into much detail about his first experiences with music – there was no lightbulb moment, no dramatic ‘chosen one’ reveal. It just sort of clicked. He made impressive progress over the next few years, supported by his music teachers, ‘the basis of all (his) learning’ (Pepe Benitez and José Antonio Lopez – if you’re reading this, Juan is very grateful for everything you did!) and his somewhat unmusical family. Four years after his first music class, he enrolled in a conservatoire, studying alongside people twice his age. It’s certainly an impressive feat, one he feels a mixture of embarrassment and pride while telling me. Though I’m curious as to the effect this must have had on him and his mental health.

‘At the start it was hard,’ he admits, ‘because when you’re growing up you naturally have so many different interests. Dedicating yourself to music, forgetting everything else can be a challenge.’

Perhaps somewhat counter-intuitively, his decision to pursue music was not imposed on him by some overbearing tiger-parent. As mentioned, Juan does not come from a musical family. In fact, he was the first in his family to play an instrument. His pursuit and love of music is entirely self-started.

Despite a go-getting attitude and supportive family, Juan’s musical journey was never simple. To quote Miley Cyrus (I can feel all your eyes rolling as I type this), ‘there’s always gonna be another mountain, I’m always gonna wanna make it move.’ Similarly, Juan faced his same share of difficulties. While these didn’t involve being hounded by the press and 12-year-old Disney fans, they were, nonetheless, challenging in their own right. Economic struggles and a lack of comprehensive music education in his hometown certainly proved problematic. But, through sheer grit and determination, he ended up where he is today, somewhere he’s pretty proud of.

I’m curious as to what he would say to his 9-year-old self, getting up at a ridiculously early hour every day to take an hour-long bus ride to his conservatoire.

‘Never give up,’ he says doggedly, ‘you’ll encounter many obstacles on the path, you can achieve anything you want with a little strength and determination – the two qualities a musician must always have.’

Juan is currently very excited for a concert he’s playing next week with his quartet which, if all goes to plan, will be a live event. His optimistic belief that the [covid-19] situation is improving instills me with hope as I begin to think that maybe the pandemic might not have killed live music.

This is a quartet he has played with since 2011, made up of friends from his hometown. As a result, they are a very tight-knit bunch. There’s no better experience than playing a live gig with your friends, he tells me.

Aside from this, he currently works at a publishing house, arranging and publishing scores for bands. He also teaches in various schools in Seville, an interesting choice which suggests that he has come full circle. As a child, he discovered that there were not many opportunities to learn music. As such he would have to get an hour-long bus ride each morning just to be able to learn. His return to Seville to give lessons highlights the change he wants to have on the world of music, making it more accessible for every student, regardless of where they come from.

Play Us a Song, You’re the Clarinet Man

This is a misleading subtitle, not least because I have apparently misquoted one of the most famous songs in history, but also because Juan’s musical experience is by no means limited to the clarinet. While he has mastered this instrument, he is also skilled in all the instruments of the clarinet family, as well as the requinto, piano and saxophone.

He has always had a gift for music. As such, there were no specific techniques that gave him any real difficulty – not even music theory. He tells me that he loved music theory as a child, recognising its importance from an early age. He’s thankful he put the requisite time and energy in as a child otherwise ‘it would have been a lot harder.’

With a passion and a gift for music, he’s never had trouble finding motivation. When I ask him about this, his answer is bizarre and simultaneously makes perfect sense:

‘It’s not really about motivation per se. When you play, you need to feel. It’s about feeling.’

Any helpful hints for an aspiring musician?

‘The metronome is your best friend,’ he tells me, ‘a basic understanding of rhythm is vital, otherwise you’ll struggle.’

And his relationship with Jellynote?

Juan has been writing scores for Jellynote for a year now, though his experience in writing sheet music significantly predates this. His passion was initially kindled by a composition teacher, Ramón Respaldo, who taught him everything he knew about composition and arrangements. Nowadays, he puts these skills to good use. He has greatly enjoyed his time with Jellynote, feeling truly ‘valued’ by the community.

I can’t help but wonder whether Juan has any regrets, whether some part of him may have wanted to live a normal childhood, with opportunities to explore other interests and passions. He, on the other hand, does not share these concerns.

‘It was a normal childhood because, for me, it’s all I’ve ever known,’ he explores, ‘it really doesn’t weigh on me.”

I ask him about other careers he might have chosen, but he clearly has not given much thought to alternative lifestyles. Eventually, he settles on writing, but admits ‘it’s the first time anyone has ever asked (him) this question.’

Nowadays, Juan lives in Seville with his wife, a dietician. They have no children, but if they did decide to – would he put them through the same grueling path to musical success that he experienced?

‘If it’s something they enjoy from an early age, they can study it – I won’t stop them. But only if they want to, I’m not going to make them do anything they don’t want to do.’

As our conversation draws to a close, I decide to ask the most difficult, complicated and unfair question an interviewer can possibly answer – do you regret anything now?

I half expect a difficult, complicated and unfair answer back. But then again, this is Juan.

If you want to be up to date with all the compositions and arrangements of Juan A. Pérez, subscribe to our newsletter.

This website uses cookies to improve your experience while you navigate through the website. Out of these, the cookies that are categorized as necessary are stored on your browser as they are essential for the working of basic functionalities of the website. We also use third-party cookies that help us analyze and understand how you use this website. These cookies will be stored in your browser only with your consent. You also have the option to opt-out of these cookies. But opting out of some of these cookies may affect your browsing experience.
Necessary Siempre activado
Necessary cookies are absolutely essential for the website to function properly. This category only includes cookies that ensures basic functionalities and security features of the website. These cookies do not store any personal information.
Non-necessary
Any cookies that may not be particularly necessary for the website to function and is used specifically to collect user personal data via analytics, ads, other embedded contents are termed as non-necessary cookies. It is mandatory to procure user consent prior to running these cookies on your website.
GUARDAR Y ACEPTAR
×